We finished problem 3 in no time (what if the floor were completely frictionless), and then we moved on to problem 4 where the real trouble always begins. Here’s the problem:

It’s one of the Matt Greenwolfe problems, but I’ve worked on the precise wording a lot to avoid some of the semantics problems that have tripped up my students in the past. (For example, it used to say something like, “reduces their force to half the value needed to maintain a constant velocity.” That prompted a lot of students to think it was saying that the pusher was maintaining a constant velocity with that half-value force. Which meant that they blamed their initial wrong answers on the wording and didn’t always analyze their own thinking as completely.)

We had (as per usual) a variety of ideas about what would happen when the force was reduced to half. I’d never seen the drop-then-rise idea before, but it started to spread around the room for a bit after one student immediately started the conversation with, “I disagree with basically everyone else’s boards.” His idea was that we had seen with the spring scale that when we exerted a constant force, the object always kept speeding up. (There were some nuances that hadn’t been sorted out there yet. What they had really seen was that if they kept exerting 2 N of force on that one friction block, that block always kept speeding up. They hadn’t tried any other constant force values or objects.) 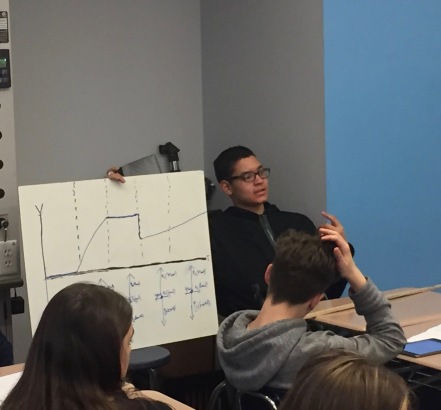 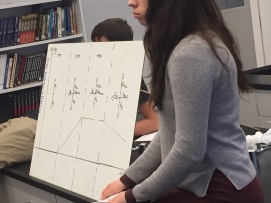 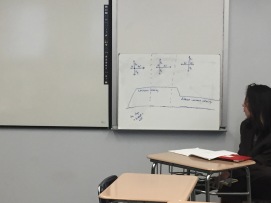 But before we could sort out that final section, we actually ran into some extended roadblocks with the constant velocity section. Even though the problem says that the person pushes the box so that it has a constant velocity, there was some controversy over whether that could actually happen. One student didn’t believe that the person could ever really get their normal force to match the friction force perfectly. And if that didn’t happen, then the forces couldn’t be balanced. And if the forces weren’t balanced, then the velocity couldn’t be constant.

At the same time, another student was convinced that the normal force the person exerts and the friction force with the floor couldn’t be the same size anyway. Because if those forces were the same size, then the box wouldn’t be able to move. That was a huge point of discussion for quite a while. Some vehement defenders of Talia’s Law were insistent that a box that had a constant velocity must have balanced forces (so those forces must be the same size). Others agreed intellectually with that idea, but their guts did not agree, so they couldn’t decide right away.

And that’s one of the reasons why I love this problem. It goes on long enough to get past kids saying what they know they are “supposed to” say. So they can really sort their ideas with each other and convince themselves of what must be true.

We will need just a few more minutes next class to finish the last part of the problem. Then we will check in with an assessment and move on to practicing FBDs, doing experiments, and solving problems. And we are already at the halfway point for this course!

Bonus content: Here’s a student I saw using his iPad to simulate the box being pushed across the table. He’s also used it as a straight-edge in a previous class. 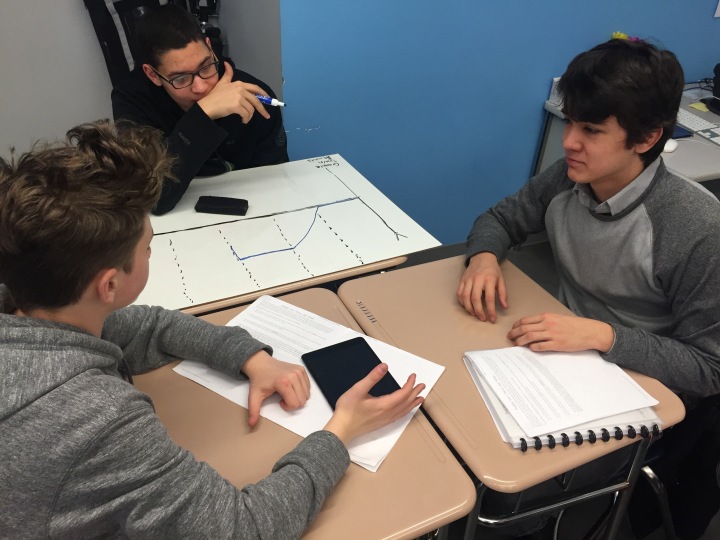